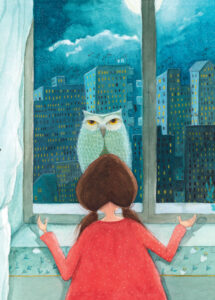 Eleni Priovolou
A nothing that became something

The book | Elli has to solve the puzzle that her mum gave her. This time her computer won't help her but another “magical screen” will make her travel faraway.

A wonderful story for the children’s addiction to the screens as well as for the creative imagination that can function positively within family and the contemporary rhythms of life.

The authors | Eleni Priovolou was born at Angelokastro in western Greece. She studied Sociology at the Panteios University in Athens. Apart from her writings for adults she has done significant work in books for children and young people, theatre for children and fairy-tales. In 2009 she won the Novel for Older Children’s Prize awarded by the magazine «Diavazo» for her book «The Signal», while in 2010 her novel «The Way I Wanted to Live» won the Readers’ Prize. IBBY.

Effie Lada was born in a small village in Peloponnese, Greece.
She has illustrated covers of many books and has published more than 100 books.
Her books have been translated to, Italian, Korean, Russian, Chinese, Croatian and Turkish.
*Ιn 1998 she participated as an illustrator in the 15η Mostra internationale d’ illustrazione per l’ infanzia in Sarmede, Italy
*In 2004 she participated in the International Illustrators Exhibition, in Bologna.
*On 2005 was held her exclusive exhibition in Athens (Gazi, 100 Piraeus Str.) under the title: Once upon a time in Athens…
*In 2005, she designed the stage for the musical performance of the Irish tale “The Christmas Cuckoo”, held on (14-18 December) at the Music Hall of Thessaloniki.
*In 2006 her book “Sundays in the park” was nominated for the National Illustration Award.
*2008-2009 Participation in the 26th international exhibition of Illustrations, Sarmede. *2009: Illustration award from the IBBY for the book “A rain of stars”
*Her name was written on the honorary board of IBBY for the illustration
*Nomination for the “Diavazo” award for the book “A rain of stars”.
*2009: Individual exhibition at the Black Duck Gallery
*2009. “A Rain of Stars” nominated for the State Prize for Children’s Book Illustration.
*2010. Nomination for the 2011, Astrid Lindgren Memorial Award
*2011 Participation in the BIENNIAL OF ILLUSTRATIONS BRATISLAVA 2011 / SLOVAKIA
*2011-12.Nomination for the 2012, Hans Christian Andersen Award
*2012 Her works are sold at Gallery to charity (http://www.gallerynucleus.com/artist/effie_lada)
*2015 Participation in the BIENNIAL OF ILLUSTRATIONS BRATISLAVA 2015/ SLOVAKIA
*2016: White Ravens 2016 https://twitter.com/hashtag/wrlist2016%20effie%20lada
*2016. Candidate for the final round of judging of Nami Concours 2017 aword 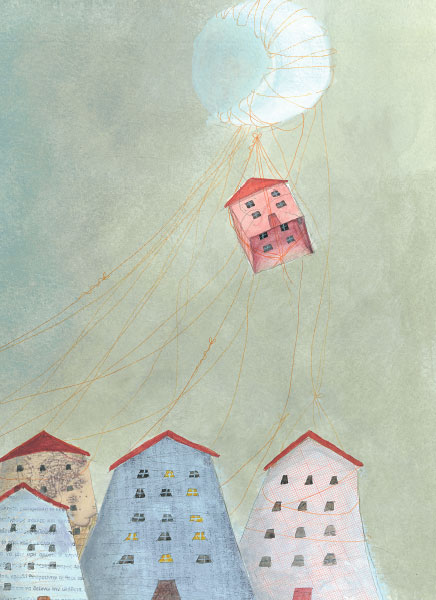 The book | How the problem of being different can be solved by the power of love and imaginative thinking.

The author | Eleni Gika was born at Koropi, a country town near Athens. A journalist and book reviewer for national newspapers and magazines since 1983, she has written novels, short stories, poetry and fairy tales, has had her work included in anthologies and has edited book series. Thirty-one of her books have been published, many of them collections of poetry but also books for children. Her novels «The Woman from the Northern Kitchen» (candidate for the 2012 Readers’ Prize), «Bolero
Wasn’t by Ravel» and «Lilith - From Letter to Letter» as well as the collected poems entitled «The Architecture of Existence» have all appeared under the Kalentis imprint.

In polished and sensitive language rich in brilliantly-coloured images, Eleni Gika has given us a serious portrait of a
lovable heroine, while without using cutting or showy words she speaks of one of our fellow-beings who is diff erent.
diastixo.gr

Eleni Gika’s story is sensitive and tender. [...] In illustrating her book, Effi e Lada at times follows the text and at others
unobtrusively allows the pictures to tell their own story.
elniplex.com

Sensitive, and with appeal to readers of all ages, Eleni Gika’s fairytale-like story speaks of being diff erent and the power
each one of us has to win respect for being unlike others..
Αrgyro Mountaki, author