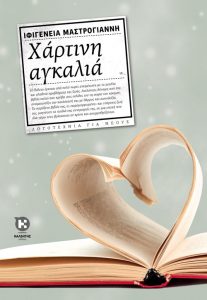 The book | Thalia comes face to face with life’s big real problems from a very early age. Drawing strength from an old book which conceals the wisdom of the world within its pages, she confronts her situation with courage and optimism. This strange book of hers enchants the children that she’s friendly with in an age when everything around them is in crisis and confusion. In the little club they form, each one of them will come to realize the value of the person next to them - The Other - and when Thalia, at a critical juncture in her life, faces danger to save her book they will stumble upon a deeper meaning of life that will colour their dreams.

• Candidate for the Best Novel for Adolescents Prize, PUBLIC 2015

In its 248 pages this book gives us a vivid picture of life in a senior high school, including amongst other things the pupils’ relationships with their teachers. Major social problems with immigrants, the problem of unemployment, the anti-social behaviour displayed by some young people, families with nowhere leﬅ to turn to and other evidence of crisis such as children going hungry or either neglected or treated harshly by their parents are all examined with a critical eye.The author shows deep knowledge of the major role that adolescence plays in the formation of a person’s character.
kosvoice.gr