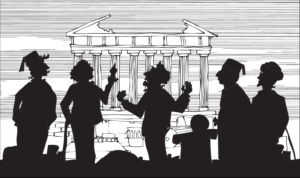 The book | This intriguing story refers to the contradictory personalities of Lord Byron and Thomas Bruce, better known as the 7th Earl of Elgin. The former was one of the most aspiring British romantic poets in history who became an active figure in the Greek Independence movement in 1821. The latter was responsible for the grand larceny of the Parthenon marbles in 1806.

“Lord Byron and Lord Elgin” is the first book of the Short Stories about Historical Events. A collection of thought-provoking stories which encourage young adults to acquire valuable knowledge and develop their critical thinking.

The author | Eleni Svoronou is a well-known author of children's and youth literature. She has written a lot of books which have been awarded several times with important prizes such as the Circle of the Greek Children’s Book Award (IBBY) and the State Literary Award. In addition, one of her books has been included in the White Ravens’ 2016 list. She works for WWF Greece organizing educational programs about natural heritage and culture.