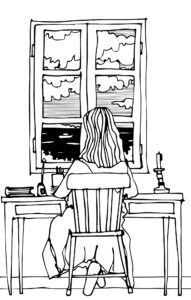 The book | Evanthia Kairi, the main character of the story is the sister of the great philosopher and clergyman Theofilos Kairis. She was one of the most prominent female figures in Modern Greek History. At the age of thirteen she started studying ancient Greek, mathematics, French and Italian paving the way for other young women. At the age of fifteen she applied to women all over the world seeking support for the Greek Revolution. She also wrote the first play of modern Greece and acquired the title “The tenth great muse of the Greek Nation”.

This is the sixth book of the series “Short Stories about Historical Events”.

Filippos Fotiadis studied Architecture and Fine Arts at the Rhode Island School of Design and the Harvard Graduate School of Design.
Along with architecture, he is engaged in painting and illustrates children’s books.